Taking a step back from Gain’s individual situation, it’s interesting to look its trajectory in the context of other early-stage companies.

How does Gain’s to-date success compare to others’?

And, what are the industry odds of continued success?

It’s Hard out Here for a Startup

Almost two years ago, in another blog post I laid out the pretty dire statistics for startups referencing CB Insights data . 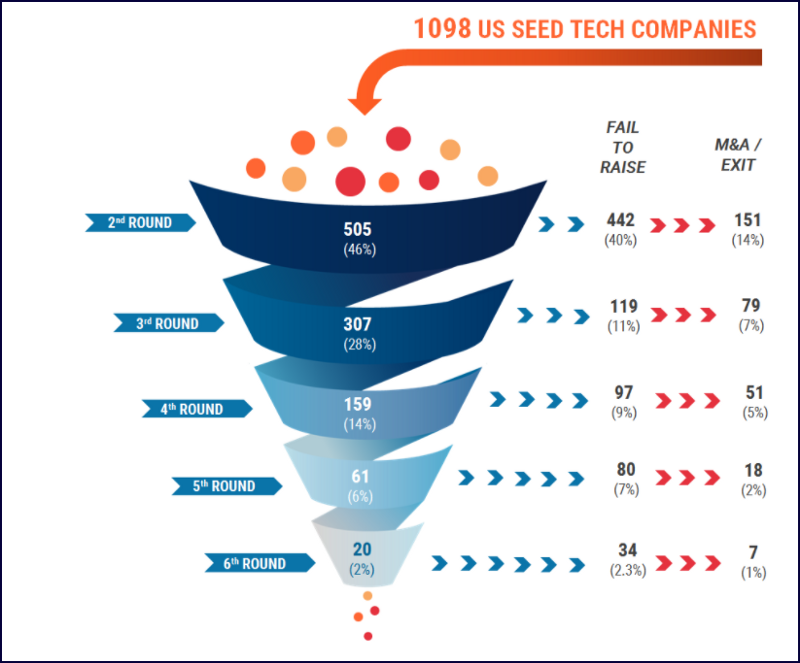 The punchline of the above graphic: of approximately one thousand startups followed who had raised a seed round, approximately two-thirds would ultimately fail.

The shape is not pretty – a steeply sloping line in the near term which is most certainly not “up and to the right.”

The Prospect of Stability

Notably, the data shows only marginally improving prospects across a company’s first years of operation. CB Insights plots the odds as follows:

For the small minority of startups which succeed in raising a first (seed) round of financing, 67% will ultimately fail.

Raise a second round? Your likelihood of failing plummets to….60%.

Raise a third round? Your likelihood of failing falls further to… no, wait, it stays the same… 60%.

The exceptionally high rate of failure of startups during their infant mortality stage is well known. What is not universally recognized is how long infancy lasts.

When is a company generally out of the woods?

As the authors of the second survivability study referenced above study put it: